The COVID-19 pandemic highlighted issues regarding food self-sufficiency and dependence on imports, but Ferme d’Hiver has been pondering the situation for nearly 3 years. With a keen awareness of climate changes that are disrupting the agricultural world, the company has developed an innovative agro-technology solution. This makes year-round produce growing viable, eco-responsible and profitable.

Because it easily integrates into existing farming installations and supply chains, Ferme d’Hiver can now focus on its primary goal, which is to replace 10% of strawberry imports into Canada within 3 years. 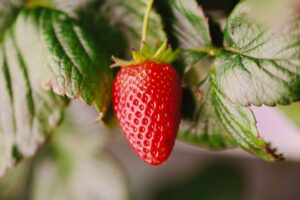 Local procurement on both small and large scales

With such great ambitions, Ferme d’Hiver had to build its deployment strategy based on the agricultural reality of Quebec. Thus, its agrotech solution can be tailored to the needs of produce growers. Ferme d’Hiver is viable for small scale implementations and large-scale industrial projects alike.

In fact, a first Ferme d’Hiver is currently being built in Vaudreuil. The installation will single-handedly double the volume of strawberries produced in winter in Quebec!

Enjoying the taste of Quebec all year long… Now that’s a wish consumers have cherished for a long time. And now that Ferme d’Hiver’s deployment has begun, that dream will soon come true. The Fraise d’Hiver is not only tasty, it is grown locally in an eco-responsible manner. Free of chemical pesticides, picked when ripe, it’s got what it takes to steal the show at the grocery store. Available from October to June, it will be in several IGA stores starting in the fall of 2021.

Here at home, as around the world, climate change, increasingly dense populations and food self-sufficiency are issues that will mark the coming decades. Ferme d’Hiver can already recover almost of the water required for production. Moreover, the system can redistribute all its energy to an adjacent building in the form of heat. By committing to continue its research and development efforts, the company aims to diversify its crops and minimize the environmental impacts of produce growing.

With its innovations, Ferme d’Hiver has everything to become an ally of a more independent Quebec regarding produce imports.

Follow our latest developments and Ferme d’Hiver installations being set up near you by subscribing to our Facebook and LinkedIn pages!